The marriage of art and fashion is not only going strong, it’s renewing its vows. The annals of fashion history are peppered with the biggest names in art: Salvador Dalí sparked the imagination of Schiaparelli in the 30s, Piet Mondriaan inspired Yves Saint Laurent in 1965, Louis Vuitton partnered with Takashi Murakami in 2007 and Alexander McQueen teamed up with Damian Hirst in 2013, to name a few. 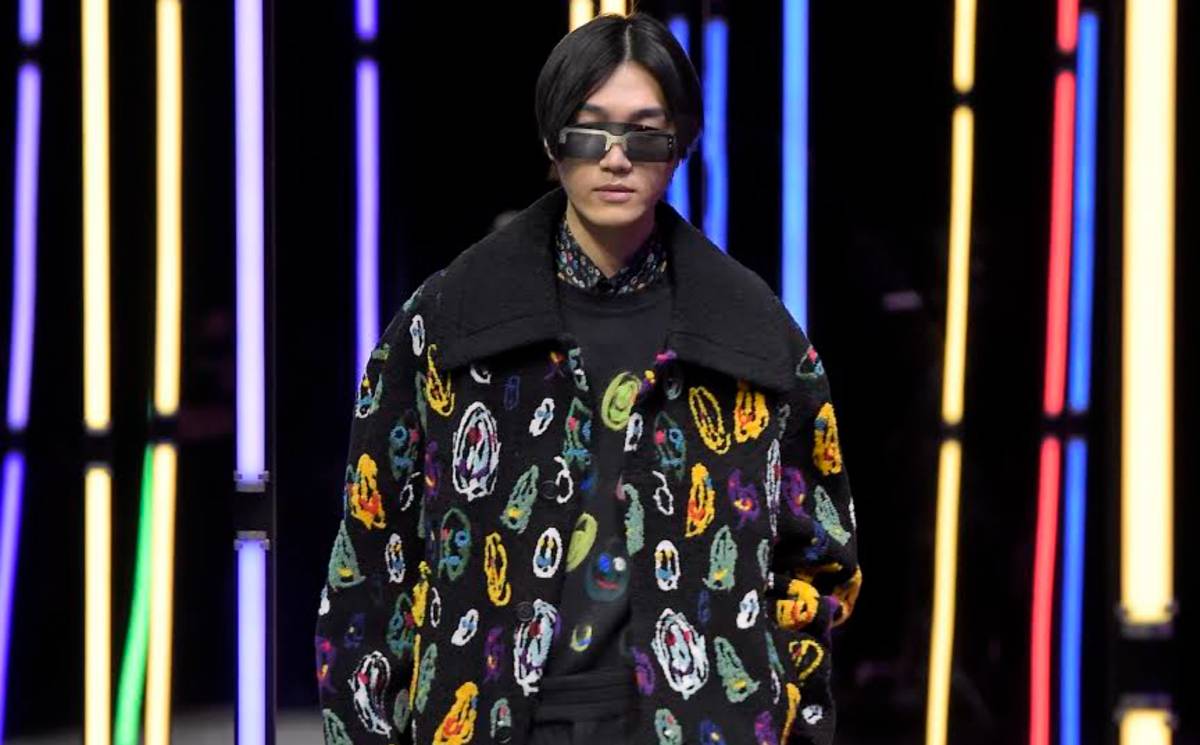 But if Milan Fashion Week is any indication, men will be wearing their art on their sleeve for fall/winter 21. The buzzy collaboration between Fendi and English painter Noel Fielding, who is perhaps better known in the US as the vampiric presenter of The Great British Baking Show, made headlines. His bright abstracts translate perfectly into graphics on knits and allover motifs on dressing gown coats.

“He’s a multi-faceted man: an actor, a comedian, but also an artist, a musician, a writer. Today, you have to be a multi-tasker, someone who escapes definition,” Silvia Fendi told Vogue. “And I think, in the future, when we come out of this, we’ll all want to be more individualistic in our way of dressing. He is already that: an art installation.” Top designers who look to the art world for inspiration

Speaking of imminent individualism, the Fendi womenswear collection which will be presented in February is the first under Artistic Director, Kim Jones, himself an expert at sniffing out the most fruitful art world collabs. For his first Dior menswear show in 2018 Jones tapped street artist Brian Donnelly, aka KAWS, while fall 2019 saw him welcoming LA artist Raymond Pettibon; last summer, Jones visited the Japanese artist Hajime Sorayama in her studio to purpose a partnership after viewing her work in a Tokyo gallery, and for fall 2021 he approached Basquiat contemporary, NYC-based Kenny Scharf to co-create prints in the artist’s signature cartoon style. What artful bid will he make for his Milan Fashion Week womenswear debut?

Sterling Ruby, the Californian artist best known to the fashion world for his decade-long creative collaboration with Raf Simons both in the Belgian designer’s eponymous menswear collection and during his creative directorship at Calvin Klein, was admitted onto the haute couture schedule which will occur later this month. He launched his brand S.R. Studio. L.A. C.A. at Florence’s Pitti Uomo fair in 2019, but he has been blurring the lines between art and fashion for three decades incorporating thread, stitching, patchworking, dyed and bleached textiles into his art practice.

Northern Irish designer Jonathan Anderson is a contemporary art enthusiast and crusader for collabs. In 2016 while other designers were opening pop-ups, he created the Jonathan Anderson Workshops showcasing the work of likeminded creatives working in ceramics, sculpture, photography, and in 2017 he curated an exhibition at Yorkshire’s Hepworth Wakefield gallery. In his role as creative director at LVMH-owned Spanish heritage brand, Loewe, he worked with contemporary British artist Anthea Hamilton in 2018 to create an immersive installation for Tate Britain and called on her again when the pandemic prevented the house from staging a show for spring 21. The reunion led to the creation of life-size posters of looks from the collection entitled “Show-On-A-Wall” which were then sent to editors along with glue and scissors so they could paste them up at home. For his own JW Anderson line he created a capsule collection with British anti-establishment duo Gilbert and George for Spring-Summer ’19 and for spring ’20 invited Canadian sculptor Liz Magor to collaborate after seeing her work in a Harvard University exhibition and realizing that they explored similar themes. In recognition of his bonefide art cred, Anderson has been appointed a trustee of the Victoria & Albert Museum and is a private collector of 300+ works of art which include pieces by Magali Reus and Cy Twombly. 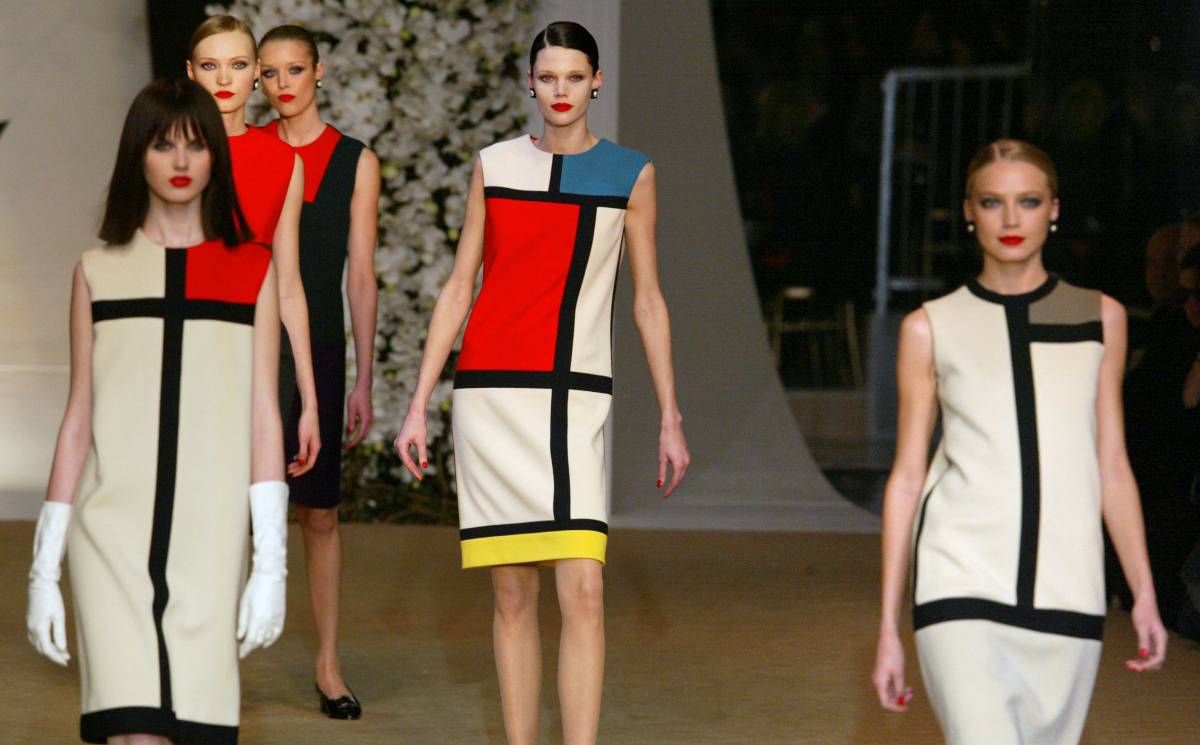 Perhaps more than any other working designer Anderson understands that a sharing economy and cross pollination of creative ideas defines our time, and that the century-old dialogue between art and fashion cannot be reduced to a marketing gimmick to sell purses and sneakers. “I think it’s less elitist when you don’t have segregation in creativity,” Anderson told Artnet, “For me, it’s all one big message. It’s just about being obsessed.”

The modern-day union of art and fashion isn’t about lofty elitists pairing up to pat each other on the back. It’s high culture with a down-to-earth attitude and, in the partnerships which feature graffiti artists, an offshoot of our unending fascination with streetwear-infused luxury labels. But if fashion’s mingling with the art world could influence how we view clothing so that it conveys the same emotion within the physical space of our closets as that of a masterpiece in a gallery, that would be a bonus. We might treasure our garments for life, even consider them collectibles.

After the Black Lives Matter movement opened everyone’s eyes to the utter whiteness and inherent bias in our industry, collabs provide a means of looking outwards. Partnerships allow us not only to invite creatives to the table who have not been given a seat before, but to go one better, to meet these creatives where they are. It’s the least fashion can do, to get off its butt and go see what’s on the other side of its walled grounds. For spring 2021, Dior’s collaboration with Ghanaian artist Amoako Boafo awakened the fashion cognoscenti to Boafo’s finger-painted portraits of Black subjects, and the house took the opportunity to donate to the African artist, setting an example of elevating non-white voices while supporting creative endeavor.

If, as Silvia Fendi says, the post-pandemic man escapes definition, then the diminishing distinction between a painting hanging by a nail on a wall and a dress hanging by straps on a hanger underlines this sentiment. Society is shedding its labels and silos. And art hasn’t been viewed within the hushed environment of a gallery for months due to Covid’s enforced closures of our institutions. Art now moves in our socially-distanced society, fluttering on hemlines or announcing itself from sweater fronts.

In A Lehenga And Shirt, Kajol Shows Us How To Ace Fusion Style

3 Offbeat Jackets That Will Make You Stand Out This Winter