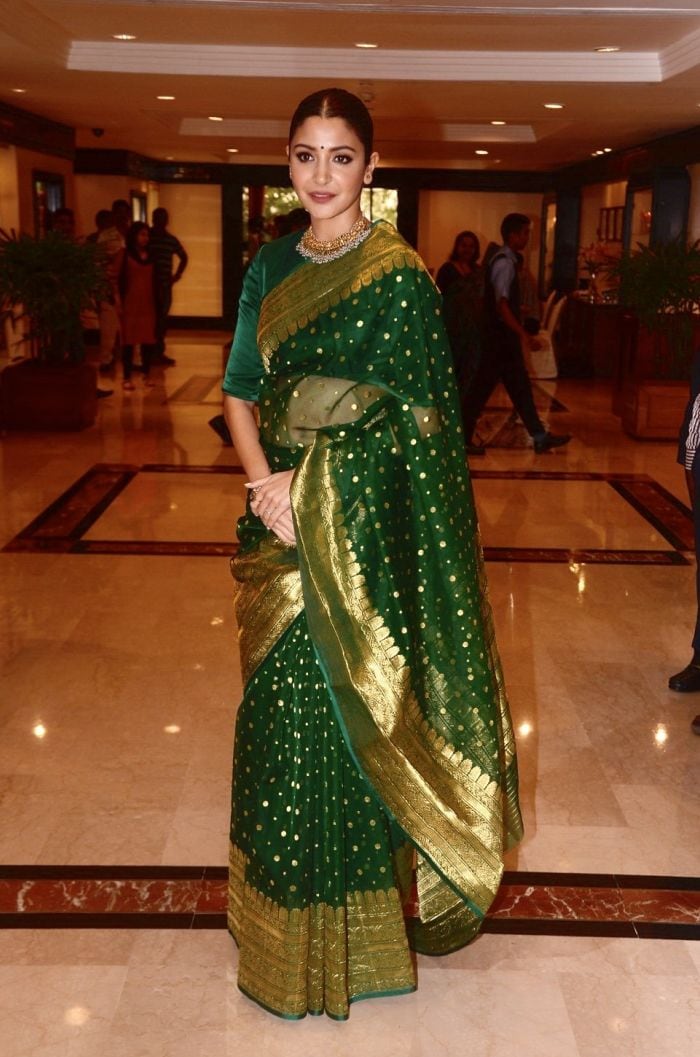 Bollywood actress Anushka Sharma has surely been notching up the style meter with her stunning appearances for the promotions of her upcoming film Sui Dhaaga. Keeping with the ‘Made in India’ theme of the film, the diva has also been showcasing a range of beautiful outfits that highlight Indian handlooms and craftworks. From making a case for chic brocade pants to stealing all attention in a chikankari suit, the actress’ chic style statements have been on point. And now, with her latest saree look, Anushka has given us more reasons to crush on Indian fabrics all over again.

Anushka recently attended the 34th Anniversary Priyadarshni Academy Global Awards, where she was conferred with the Smita Patil Memorial Award that was presented to her by Union Ministers Nitin Gadkari and Piyush Goyal in Mumbai on Wednesday evening. The gorgeous actress made a show stopping appearance dressed in a green Banarasi chanderi silk saree. The handloom sareehad heavy borders with gold zari work that added to its regal look along with the dotted patterns all over the body. She teamed it with a matching silk blouse and statement jewellery – a beaded gold choker and kundan bangles. Her hair and makeup kept with a classic style and we loved the green bindi that added an extra edge to her look.

Anushka’s saree look instantly made us reminisce her glamorous style statement during her wedding reception in Delhi when she opted to wear a red Benarasi silk saree by designer Sabyasachi Mukherjee. We couldn’t help but draw comparisons between the two looks as they were very similar, even her hairstyle. But of course, for her reception, Anushka had gone for heavy accessories complete with a red bindi, sindoor and mogras in her hair to look like a classic bride.