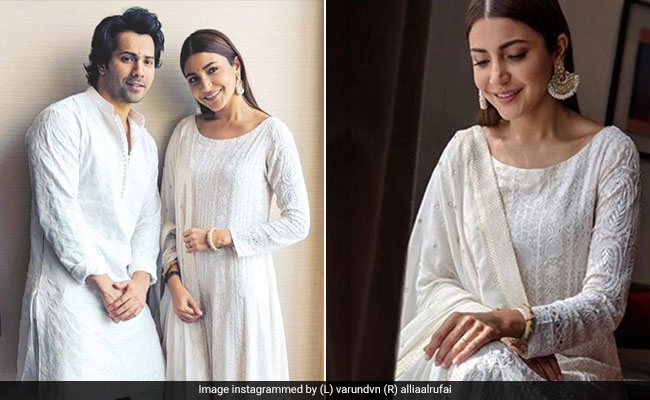 Many of us are super excited to watch the upcoming film Sui Dhaaga: Made In India. Not only does the film bring together two great actors, Anushka Sharma and Varun Dhawan, but we are also very keen to watch the story of a tailor and his wife taking the message of Make In India forward. But for now, we are quite impressed with the host of Indian designers and fabrics that the star cast has been seen wearing for various promotional events for the film.

Just this morning, Anushka and Varun were seen in splendid white chikankari outfits for a promotional event in Lucknow. Varun looked dapper in an exquisite kurta-pajama. Anushka, on the other hand, wore a suit with extensive chikankari embroidery all over it from Kanika Kapoor House of Chikankari. The suit has paisley motifs on the kurta and was paired with a dupatta with a gold-trimmed border. Anushka and Varun attended a Vishwakarma Puja together.

Anushka gave us a lesson on how to wear a chikankari outfit with class and elegance. With a suit that boasted of intricate and extensive embroidery all over, Anushka kept her makeup, hair and accessories very subtle. She wore Purab Paschim statement earrings, a bangle by Aquamarine Jewellery, and a bindi to go along with the outfit.

The much awaited film promises to be an emotional joyride, but we also hope that it talks about India’s various contributions to the world of fashion. Meanwhile, let us wait for more desi looks from Anushka.

Bored of Thick Woollens? How About Trying Some Suede Coats This Winter?

Hand Accessories To Wear With Your Traditional Indian Outfits