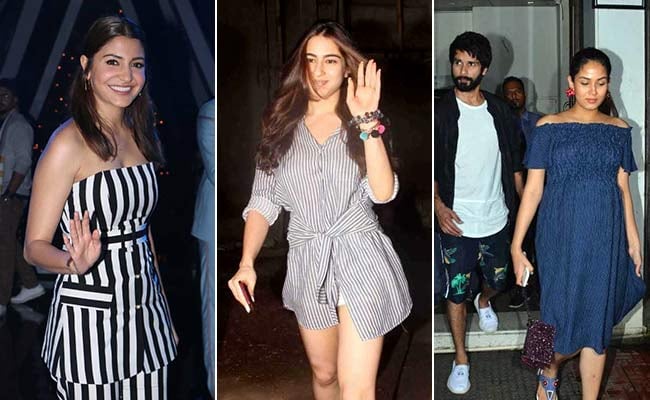 Anushka Sharma and Sara Ali Khan are both rather popular celebrities, albeit in very different ways. Anushka Sharma is of course, an established and much sought after actor in Bollywood today. She’s proven her metal over the years through her films and versatility as an actor. Sara Ali Khan on the other hand is yet to be seen in her debut film, Kedarnath, which after a rather tumultuous journey, seems to have finally landed on solid ground. Sara’s premature popularity has to do with her lineage, yes, but some of it can also be attributed to the young actor’s inherent sense of style and her seemingly natural ease while dealing with fans. That’s what both Anushka and Sara seem to have in common, even though they’re in vastly different places in their careers.

Talking about what they have in common, both Anushka Sharma and Sara Ali Khan seem to have gotten a whiff of the stripe print trend that seems to have captivated fashion enthusiasts everywhere. Both these actors were spotted yesterday wearing fashionable ensembles that featured stripes.

While promoting her upcoming movie, Sui Dhaga, on the sets of a reality show yesterday, Anushka was spotted wearing a black and white stripe co-ord set from Atsu. Her outfit featured a long tube top and flared pants. With dewy makeup and natural hair, Anushka looked resplendent.

Sara Ali Khan is seen ever so often making salon runs in Mumbai. Yesterday, the young actor was spotted once again after a salon session. Sara chose to wear a long grey and white stripe tie around shirt with a pair of barely visible white shorts. We’re loving Sara’s casual but uber chic outfit – and it’s hard to miss her luscious, flowing locks.

Looks like Sara and Anushka aren’t the only ones opting for stripes, though. Second time mother-to-be Mira Rajput also chose to wear stripes yesterday while out for a dinner date with her husband, Shahid Kapoor. A pregnant Mira looked absolutely fabulous in a blue off-shoulder midi dress, which she chose to pair with embellished blue sandals.

Loving the stripes on these ladies? Well, time to put together a few stripe filled outfits of your own then.

Karwa Chauth 2019: From Shilpa Shetty To Raveena Tandon, Here’s How These Bollywood Celebs Are Celebrating

This Online Platform Is a One-Stop Shop for African Fashion