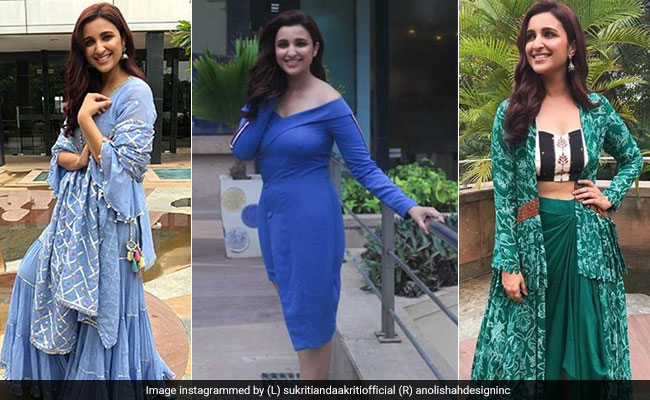 Parineeti Chopra is out and about promoting her upcoming film Namaste England. The actress who kickstarted the promotions yesterday is already making some fashion statements. Going by her looks for the promotions until now, Parineeti seems to be going for a mix of desi and chic. The actress, who is going to be seen opposite Arjun Kapoor for the second time has worn a couple of outfits so far that really brought out the desi girl in her. As excited as we are to see her chemistry with Arjun on the big screen again, we are also looking forward to see some bold statements Pari will (hopefully) make with her sartorial choices.

In a blue Sukriti & Aakriti sharara set and sparkling silver gota work dupatta, Parineeti looked perfectly desi and pretty. The dupatta had a rather Rajasthani feel about it and managed to add the right amount of swag to the outfit.

For another promotional event, Parineeti opted for a green Anoli Shah asymmetrical outfit. The ensemble comprised of a skirt, a long floral jacket and a crop top. Parineeti managed looking alright, but we must say that the Indo-Western outfit could have been way better. The Fizzy Goblet shoes on the other hand proved to be a hit.

Cut to this blue dress worn by Parineeti for a Namaste England photoshoot. We have mixed feelings about this dress and her overall look which failed to make an impact, or at least a good one. We think Parineeti and her stylist can do way better.

We wonder if there are more Indian outfits that Parineeti is going to wear specifically for Namaste England promotions. But desi or not, we hope there are some legit style statements coming our way, and not a series of hits and misses. Best of luck, Parineeti.

Shilpa Shetty Just Wore A Lot Of Polka Dots. Here’s How You Can Too

Manhattan Vintage: fabulous outfits with hats! – Which is your favorite?

Anushka Sharma Is Making A Case For Solid Neutrals