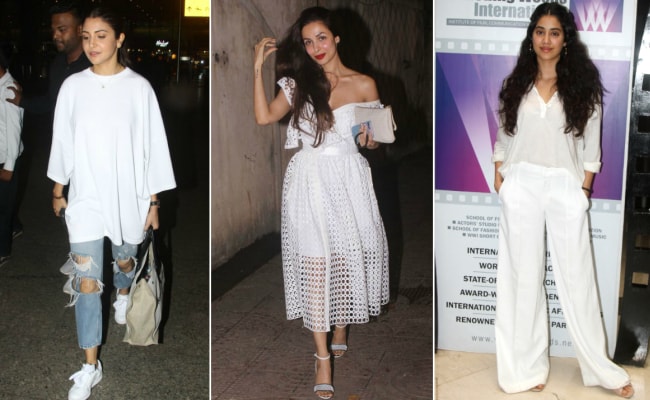 Just when we thought that the colour green was going to rule monsoon style charts – remember Priyanka Chopra’s dark green bodysuit that she recently wore for an event in Delhi or Kangana Ranaut’s mint green chiffon saree? – our Bollywood celebs are back to crushing on pretty whites all over again. Well, who can blame them? There’s really no replacing classics, and whites work wonders for all seasons. Period. Moving on from breezy maxi dresses and summery tops, celebs are now making trendy fashion statements in new styles.

With ‘casual chic’ being the fashion mantra, celebrity airport fashion seems to be getting better and better. We recently spotted Anushka Sharma in Mumbai airport, giving a stylish new spin to the denim and tee look. The actress sported an oversized white tee over a pair of ripped jeans and teamed it with a pair of sleek white sneakers. We say that’s what’s called travelling in comfort!

Another star who clearly seems to have a soft spot for whites is Malaika Arora. Throughout summer, the fashionista has been sporting many trendy maxi dresses in the classic hue. She impressed once again by looking pretty as ever in an off-shoulder midi dress that she wore for her mother’s birthday celebrations. The off-shoulder dress had laser-cut details, and Malaika teamed it with a pair of shimmery white sandals and red hot lips.

Then there’s Janhvi Kapoor, who after making heads turn in trendy ethnic wear, is now keeping in cool and casual in the best of millennial style. The actress was recently spotted at a event, where she rocked a white on white ensemble like a pro. Janhvi wore a full sleeve top with a pair of flared trousers and sported a chic curly hairstyle.

So which celebrity look was your favourite?

the Ailey Spirit Gala – choose your favorite from these 10 looks!