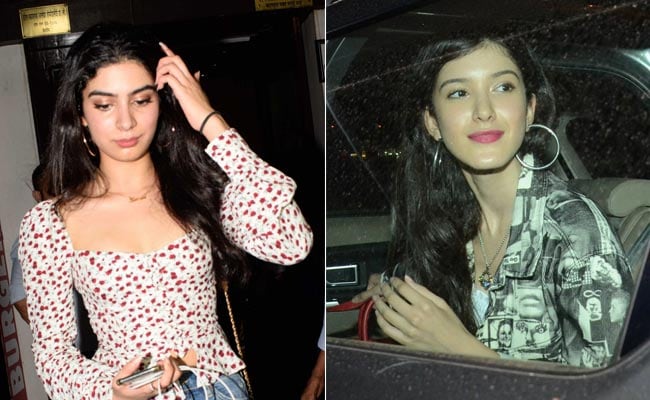 Yesterday was Friendship Day – and out came to celebrate some of Bollywood’s most famous star kids. Joining the festivity were, of course, two of the youngest Kapoors on the block – Shanaya Kapoor and Khushi Kapoor. Shanaya Kapoor, Sanjay and Maheep Kapoor’s daughter and Khushi Kapoor, Boney Kapoor and Sridevi’s daughter, need little introduction. Although the two teenagers are far from kick starting their careers in Bollywood, they are already almost as famous as the rest of their family who are well established in the film industry. Perils or perks of being born into a family full of stars? Well, in this case it definitely seems like a perk, given that both Khushi and Shanaya seem to have gained immense popularity as teenage fashionistas and trend setters.

The rather stylish cousins reportedly attended the Friendship Day celebrations in a restaurant popular with the celebrities in Mumbai – Bastian, owned and run by celebrity chef, Kelvin Cheung.

Khushi attended the bash wearing a floral corset style blouse and ripped skinny jeans. She paired the outfit with black espadrilles and a tan bag. She kept the accessories simple, by wearing her statement necklace with her name on it and a pair of hoop earrings.

Shanaya, also always on fleek when it comes to her style, chose to wear a printed monochrome jacket, a white bandeau top and bell bottomed jeans. She paired her outfit with white sneakers and a red satchel bag. Much like Khushi, Shanaya also chose to wear a pair of hoops.

Don’t these two young fashionistas know how to make quite the style statement? Well, we suppose when you’ve got Sonam Kapoor in the family, it’s only fair to say it runs in the genes.

Shraddha Kapoor In A Sunshine Dress: 4 Ways To Add A Yellow Pop To Your Closet

3 Reasons to Have a Vegas Wedding