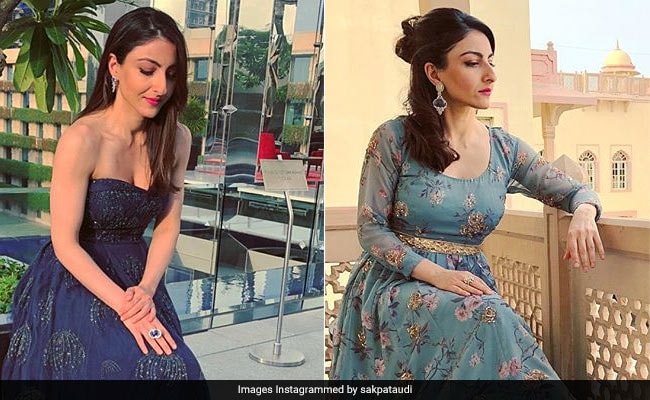 With Sharmila Tagore and Mansoor Ali Khan Pataudi as her parents, Soha Ali Khan already descends from a lineage that is royal – both in the world of films and otherwise. Even with a degree in modern history from Oxford University, Soha couldn’t help but start her career in Bollywood in 2004. It only seemed inevitable given how Soha Ali Khan’s mother and brother (Saif Ali Khan) have such an established presence in the world of Hindi cinema. Off late, though, we’ve seen Soha steer away slightly from films and focus more on something she seems to have a natural flare for – writing. Soha wrote and released her very first book – The Perils of Being Moderately Famous – last year.

But no matter what Soha might do professionally, there’s one thing no one can take away from her – her royal demeanour. We can explain. We don’t mean Soha Ali Khan seems to have her nose up in the air or seems like a prude. No, that’s not what we mean. We just mean – have you looked at all her rather royal looking maxi dresses and gowns? If you haven’t, you’re at the right place, because we’re about to make a strong case for Soha and her regal maxi dresses.

A few days ago Soha Ali Khan shared a picture of herself in a yellow and black maxi dress from designer Urvashi Joneja’s collection. We love the silhouette and cut of the maxi, both of which are rather flattering on Soha.

Tell us if you don’t think that Soha actually looks blue blooded in this blue maxi gown from Shehla Khan. With that cocktail ring on her finger, made out of cut tanzanite and set on a base of diamond baguettes, we think she does.There’s no way we could have left out this number from Astha Narang that was worn by Soha in Jodhpur earlier this month.

The light blue colour of the dress and the pastel floral print is really doing Soha’s soft, dewy makeup justice.And then there was another floral outfit for Soha from designer Pooja Shroff for an event in Mumbai. Soha looked absolutely resplendent in this floral-off shoulder maxi.

And then of course, there was this purple maxi gown from Hema Kaul which Soha wore. Soha shared a picture of herself wearing this gown with the caption – “Be loyal to the royal within you”. Well, you’ve heard it straight from the horse’s mouth.

Do you have a favourite out of Soha’s many maxis? Let us know in the comments section below.

Anushka Sharma Shows Us How To Nail Standout Brocade Pants

How to wear denim at the office: 10 tips for making it work!